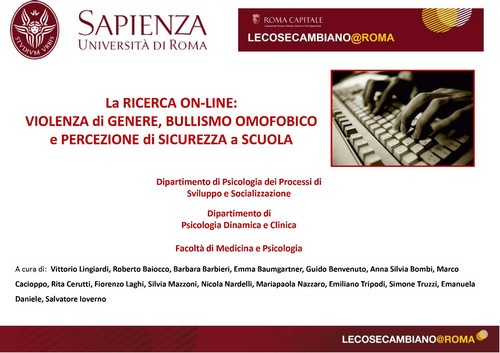 A project to understand and counteract homophobic bullying

Sapienza University of Rome
Faculty of Medicine and Psychology

Homophobic bullying is a particular form of bullying. The victims are attacked due to their homosexual orientation (real or perceived), or due to the fact that their gender role does not conform to social expectations (Lingiardi, 2012; Lingiardi, Nardelli, 2014). Several studies demonstrated an association between victimization by homophobic bullying and school dropout (Kosciw et al., 2012). There are also important effects of homophobic bullying that can result in serious and long-term disorders, including post-traumatic stress disorder (Rivers, 2004), anxiety, depression (Balsam, Rothblum, Beauchaine, 2005), and suicidal ideation (Baiocco et al., 2014; Poteat, Espelage, 2005).

The project “LECOSECAMBIANO@ROMA” (ITGETSBETTER@ROME) aims to contribute to the description and understanding of the phenomenon known as homophobic bullying within the context of Roman schools. This is an essential first step in developing effective models of prevention and intervention. In addition, gender-related violence was also investigated, both in its verbal and behavioral form, as well as attitudes of rejection and hostility towards transgender people. Homophobia and gender-based violence are often closely related and may adversely affect the mental health and psychological adjustment of girls and boys who are subjected to them. An equally important goal is the identification of specific risk and protective factors in order to counteract the former and facilitate the latter.

A website was developed for the purpose of data collection. The research participants, students in Roman schools, completed a questionnaire that was developed ad hoc by professors of the Sapienza University of Rome (completion time 15–20 minutes). The website access was password protected, with access granted to schools participating in the project in order to prevent the completion of the questionnaire by participants outside of our research sample. About 1,800 students (equally distributed by gender), with an average age of about 16 years, completed the questionnaire. According to our results, 47% of students reported that they heard homophobic remarks by schoolmates “often” or “very often,” and 25% reported that they heard the same remarks by their teachers “at least sometimes.” There were 8% of the students that claimed that they had experienced homophobic bullying at school “at least once” (7% of girls vs. 9% of boys).

The difference in the rate of bullying is high among different sexual orientations: about 6% of the heterosexual students claimed to have suffered homophobic bullying versus 35% of non-heterosexual students. Those who have experienced homophobic bullying reported a lower level of perceived well-being and considered dropping out of school due to the discomfort felt in various school contexts. Of the total participants in the study, 58% of victims confided in friends, 32% in teachers, 19% in their parents, and 11% sought help online.

In our study, 34% of the students reported that they heard of homosexuality for the first time from the Internet or TV (e.g. from the reality game show “Big Brother”), 24% from friends, 20% from family and only 8% from teachers. More than 50% of the males claimed to have at least one non-heterosexual friend. Among those who have LGBT friends, 64% reported that they were very close to their LGBT friend. About 40% of students would participate in an organization to promote the friendship between LGBT students and straight students (gay–straight alliance). There were 60% of students that reported that discussions related to sexual orientation occurred in lessons at school, but only 9% claimed to have studied these topics in books.

We use cookies on our website. Some of them are essential for the operation of the site, while others help us to improve this site and the user experience (tracking cookies). You can decide for yourself whether you want to allow cookies or not. Please note that if you reject them, you may not be able to use all the functionalities of the site.